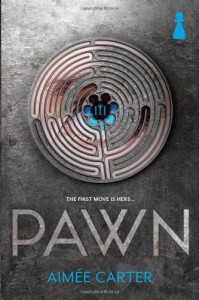 I know I have read a book very similar to this but can’t think of the name of it. Anyway straight away the story pulled me in. Kitty Doe was an interesting one after taking her test and receiving a ranking of three we watch her become carless with her life by stealing an orange this crime is punishable by death. But kitty gets away with Benji her boyfriend.

Benji I liked at the start he seemed kind and sweet, but when Kitty decides to join a brothel in order to give him another month so he can take his own test, so they can run away after, his protests in my eyes where weak and the fact that she went made me so angry with him for not trying harder. When Kitty becomes Lila hart after been bought at the brothel and then is masked we meet Knox, now I liked him he was secretive yet kind and charming.

The story soon takes a sinister step when Daxton the prime minister takes Kitty/Lila hunting; they aren’t hunting animals but humans. I was shocked at this discovery and didn’t expect it in the book but when we return to the Hart’s residence and see the family back stabbing and plotting to murder each other, it became exhausting and then when Benji shows up I wanted to scream. I just so don’t like him, I found the story went downhill after he arrived. I was dizzy with who to trust as everyone seemed evil Cecelia, Augusta and Daxton and I consider Benji evil. Overall this wasn’t for me but others may enjoy it.